Thanks to a clear strategic direction, after 4 years of establishment DMSpro is currently Top 3 in the DMS market, together with FPT and Accenture (USA).

More than 2 years ago, SAP (Germany) – the largest software corporation in Europe was seeking a partner to develop Distribution Management System (DMS) solutions for the Asia – Pacific market (excluding Japan). Surpassing even India, DMSpro is the Vietnamese company to win the heart of this technology “giant”.

As confirmed by SAP’s Representative in Vietnam with Nhip Cau Dau Tu, among solutions built on SAP Business One to manage distribution and sales performance until now, DMSpro is the only OEM partner (referring to partners who develop solutions based on SAP’s platform) of SAP in the Asia – Pacific region.

Standing on the shoulders of giants

Mr. Peter Pham is the Founder and Chairman of DMSpro. He used to assume the title of Head of Information Technology at a market-leading beverage manufacturer in Vietnam. He came to realize major loopholes in the traditional management methodology of enterprises and was quick to grasp such a business opportunity.

For example, a company took pride in its sales force of over 1.000 staff, yet after applying the DMS system they found out 30% of the salesmen are “fake”. Each salesman managed around 200 outlets, which means this company was simultaneously nurturing at least 60.000 “fake” outlets in a long period. After investing in the DMS solution and performing critical reviews, they were able to save a substantial amount of money while still ensuring operational efficiency. Based on estimates, every 1USD of investment brought them 3.8USD of profits in the same year.

“Meanwhile, retailers tend to spend 2-3% of their total annual revenue in technological investments, with an up-and-down triennial cycle. Meaning there is an increase of 3% in the first year and a gradual decline in the next 2 years. More than half of such investments go to software”, said Mr. Peter. Aware of the market potential valued at approximately USD100 million/ year and only exploited by a few players like Viettel and FPT, Mr. Peter founded DMSpro and formulated a strategy to join forces with partners whose solutions have been verified worldwide. The first one was Acumatica (USA).

Mr. Peter Pham is the Founder and Chairman of DMSpro

“By cooperating with partners such as Acumatica and SAP, we simply “purchase” tested source materials in the world to rebuild and customize solutions according to actual demands of local companies”, expressed Mr. Peter. Besides, as opposed to the majority of solution providers who focused on decentralized software, DMSpro went for the centralized model based on cloud computing technology, thereby reducing greater costs of investing in infrastructure and management compared to the old method. Additionally, this helped DMSpro enhance its flexibility in adapting to different operating scales of businesses in a short time.

One of the notable milestones for DMSpro was the Company’s impressive win of the DMS project for Tan Hiep Phat. Whereas the previous partner took 1.5 years to implement the DMS system to 150 distributors, DMSpro reached 250 within only 5 months. Thanks to a clear strategic direction, after 4 years of establishment DMSpro is currently Top 3 in the DMS market, together with FPT and Accenture (USA).

Comprehensive DMS knowledge and wide implementation experience in Vietnam – a special market where the general and modern trade channels compete fiercely have contributed to DMSpro being favored by SAP over potential Indian partners. According to Mr. Peter, SAP chose DMSpro to be the only OEM partner in Asia – Pacific because they were looking for a qualified regional DMS partner with DMSpro sharing the same vision and possessing highly competent personnel. The effective collaboration with Acumatica served as a convincing example.

In fact, the strategy of “standing on the shoulders of giants” is associated with certain challenges. First of all, license fees are relatively high, impacting the sales price and corporate profits. Mr. Peter commented that as a DMS solution partner of SAP, DMSpro just needed to pay a nominal license fee within 3 years. And right in the first year, DMSpro settled this amount in full.

Another point of concern is the mutual commitment for development. As an OEM partner, DMSpro must work in sync with SAP’s expansion strategy in the Asia – Pacific market. Accordingly, DMSpro invested heavily in human resources to satisfy requirements set out by SAP, which accounted for over half of the Company’s profits in 2016. 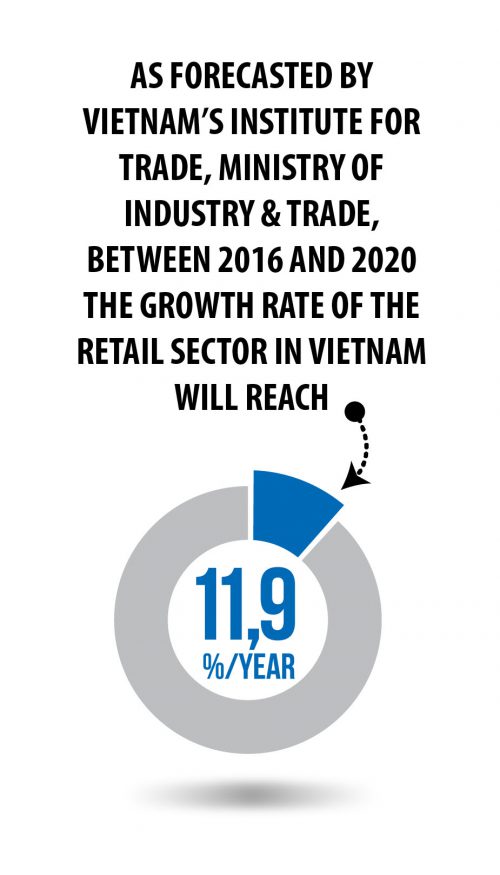 Growth rate of the retail sector in Vietnam (as forecasted by Vietnam’s Institute for Trade, Ministry of Industry & Trade)

In another case, Indonesia – the most potential market with twice as many traditional retail outlets as that in Vietnam, is divided by several islands and thus the delivery system by sea is just as diverse. This requires DMSpro to provide even more supportive tools for management.Currently DMSpro’s solutions are present in Myanmar, Thailand, Philippines, and Indonesia. Each market is accompanied by inherent challenges for DMSpro due to the different user demands. For instance, in the Yangon City of Myanmar delivery by motorbike is banned so companies pay closer attention to whether goods are delivered on time and in full, instead of merely focusing on taking customer orders.

Nevertheless, DMSpro is not faced with many obstacles because promotion schemes are still the most complicated function of the DMS solution. In Mr. Peter’s opinion, no market other than Vietnam has such a high level of complexity when it comes to promotion schemes. 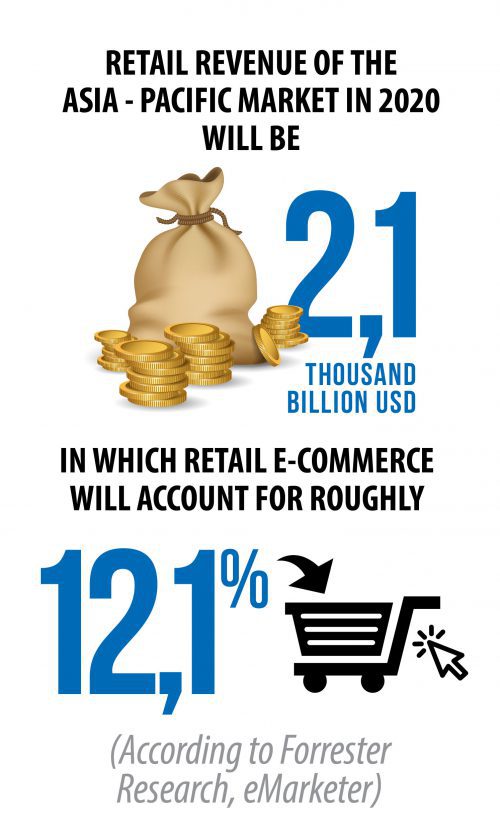 So what will the future have in store? “We must keep innovating and sustaining our start-up spirit. Anyone who thinks DMS solution providers do not rely on creativity gets the wrong end of the stick. In the distribution and retail business, market conditions keep changing rapidly at the outlets, and so does your company’s foothold”, remarked Mr. Peter.Be that as it may, DMSpro runs the most prominent risk of being replaced by other partners. This follows from the same principle: previously SAP did not have DMS experience in developed countries and now they have added DMSpro to the list of strategic partners.

READY FOR A FREE DEMO OF DISTRIBUTION MANAGEMENT SYSTEM SOLUTION AT YOUR OFFICE?